Background: The optimal technique to deliver enduring pulmonary vein isolation (PVI) using radiofrequency is under scrutiny with the introduction of Ablation Index technology and the CLOSE protocol. Modern techniques to deliver RF ablation lesions encircling the pulmonary veins often follow a nephroid geometry and in this study, this is compared to the traditional wide antral circumferential ablation (WACA) geometric lesion set. The effect on procedure duration and patient outcomes are studied.

Methods: This is a single centre retrospective comparative study of two different pulmonary vein isolation protocols for the treatment of paroxysmal atrial fibrillation (PAF). Protocol 1 is the PVI-nephroid geometry group and protocol 2 is the PVI-traditional geometry group. The procedure duration (minutes) and 1-year patient outcomes (freedom from the treated arrhythmia) across the two groups were studied. Six experienced senior operators contributed to the study and PVI cases in the study period of 2017–8 were included. The operators clearly followed either the PVI-nephroid geometry approach or the PVI-traditional method. Apart from geometric differences in the PVI lesion set, the two groups both adhere to the same point-by-point lesion delivery method, Ablation Index parameters (30–40 W; 350–450 at posterior and anterior settings) with inter-lesion distance of <6 mm.

Results: A total of 100 patients who received PVI catheter ablation treatment for PAF were included in this study. N=50 were in the PVI-nephroid geometry group and n=50 in the PVI-traditional geometry group. All patients had an acutely successful procedure with first pass isolation of all pulmonary veins. No major complications occurred in either group. Procedure duration was shorter in group one compared to group two. (129 mins [IQR: 118–143] versus 185 mins [IQR: 140–225]) p=0.0001. At the 12-month follow up, both groups had similar freedom from AF (n=45/50 [90%] versus n=43/50 [86%]).

Conclusion: Pulmonary vein isolation delivered close to the pulmonary vein ostia following a nephroid geometry is associated with shorter procedural times and similar 1-year patient outcomes. Further study in the form of a randomised trial is required to compare the two techniques. 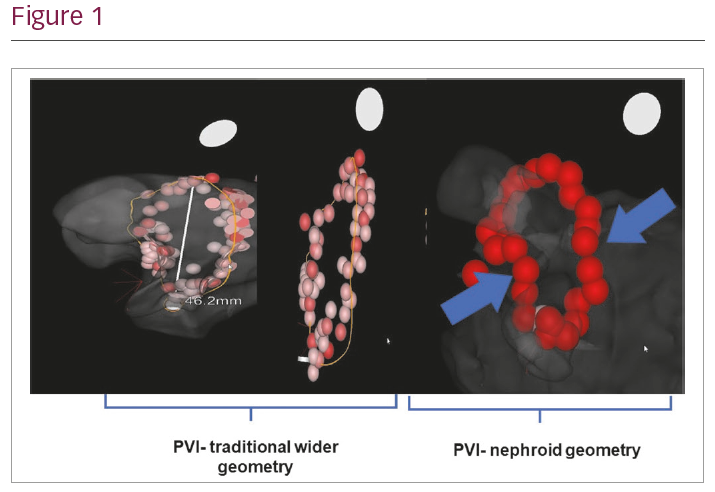