Introduction: Arrhythmias constitute an important cause of hospitalization, morbidity and mortality among adult patients with congenital heart diseases (ACHD). These patients are more predisposed to arrhythmias due to many factors including congenital and acquired abnormalities of conduction system, abnormal loading conditions leading to structural and electrical remodelling, myocardial fibrosis due to longstanding hypoxia and presence of prosthetic materials and scars together with the anatomical barriers enabling re-entrant arrhythmias. The aim of our study was to establish the prevalence of arrhythmias and need for electrophysiology (EP) support among patients with ACHD.

Methods: We conducted a retrospective review of the patients who attended ACHD clinics in a single tertiary Cardiac Centre in the UK over a period of 3 months from 01/07/2021 to 01/10/2021. The clinic letters of consecutive patients who attended ACHD clinics during that period were reviewed and information recorded in a purpose-built questionnaire. The collected information included antecedent or new diagnoses of arrhythmia, type of arrhythmia, evidence of previous and new EP procedures and investigations, previous and new implantations of devices and use of anti-arrhythmic medications.

Results: In the period between 01/07/2022 and 01/10/2022 there were 16 separate ACHD clinic lists comprising 239 appointments. In total, 23 patients failed to attend their specified appointment. Eighteen patients had two separate appointments during the period of observation; in eight cases this was due to non-attendance to the initial appointment and in 10 cases this was due to a genuine clinical need. Altogether, 207 individual patients were reviewed in the ACHD clinic during the period of observation. Of the 207 patients, 44 (21%) had evidence of arrhythmia, conduction disturbances and previous EP procedures or devices implantations (Figure 1). The most common arrhythmias in the population of patients with ACHD were atrial fibrillation (AF) and/or atrial flutter (AFl), which affected 23 patients. In 15 patients, AF/AFl was associated with simple congenital lesions (atrial septal defect or partial anomalous pulmonary venous connection [n=11], corrected left ventricular outflow tract obstruction [n=3] and coronary artery abnormality without evidence of ischaemia [n=1]). In five patients, AF/AFl was associated with lesions of moderate complexity (corrected right ventricular outflow obstruction) and in three patients it was associated with complex lesions. Seven of the 207 patients had evidence of conduction abnormalities (six patients had previous pacemaker implantations due to atrioventricular block and one patient was under surveillance for asymptomatic SN disease). Of the four patients with evidence of pre-excitation, two had undergone accessory pathway ablation and two patients had been offered the procedure but refused. There were four patients with evidence of previous ventricular tachycardia; two patients had cardiac resynchronization therapy defibrillator/implantable cardioverter-defibrillator devices, one patient had undergone surgical right ventricular scar ablation, and one patient with complex univentricular physiology, refused EP study and was being managed conservatively.

Conclusion: The population of patients attending the ACHD clinic is characterised by high burden of arrhythmias. These patients are likely to need specialist input in the ACHD clinics as well as repeated EP procedures and device re-implantations. The provision of such services should be taken into account when planning functioning of the ACHD service. ❑ 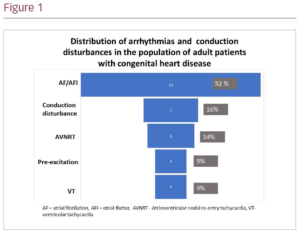