Factor Xa (FXa) inhibitors are widely used for stroke prevention in patients with nonvalvular atrial fibrillation, and for the treatment and prevention of deep venous thrombosis and pulmonary embolism. Compared to warfarin, individual FXa inhibitors are associated with a lower risk of major bleeding. Nevertheless, bleeding remains a feared complication of any anticoagulant therapy. Despite their demonstrated safety, implementation of FXa inhibitors in clinical practice may have been limited by the lack of a specific antidote. Recently, however, the United States Food and Drug Administration and the European Medicines Agency approved andexanet alfa for reversal of anticoagulation in patients treated with rivaroxaban or apixaban who have life-threatening or uncontrolled bleeding. This review will discuss andexanet alfa’s mode of action, indication for use and efficacy, with a focus on its appropriate use in clinical practice. Unnecessary usage should be prevented as this may compromise patient safety. Assessment of potentially suitable patients by a multidisciplinary team, use according to the institutional protocol, and central storage, all contribute to proper use of andexanet alfa. A practical tool to direct appropriate use of andexanet alfa is proposed.

Bleeding is a feared complication of anticoagulant therapy. Warfarin-related bleeding is responsible for one-third of all hospitalisations for adverse drug events,6 and the mortality rate of patients hospitalised with vitamin K antagonist-related bleeding was 7.6%, with a 90-day mortality of 14.1%.7 Both in patients with nonvalvular atrial fibrillation and those with venous thromboembolism, NOACs are associated with a lower risk of major bleeding compared to warfarin. In particular, NOACs were associated with a lower risk of intracranial or life-threatening bleeding.4,8–11

Andexanet alfa is designed to reverse the direct and indirect anticoagulant activity of FXa inhibitors.14 Andexanet alfa is a modified, recombinant, inactive form of human FXa, with the ability to bind and sequester FXa-inhibitor molecules, thereby reducing its activity and restoring the amount of unbound endogenous FXa. However, andexanet alfa binds to tissue factor pathway inhibitors as well, which may lead to increased thrombin generation. 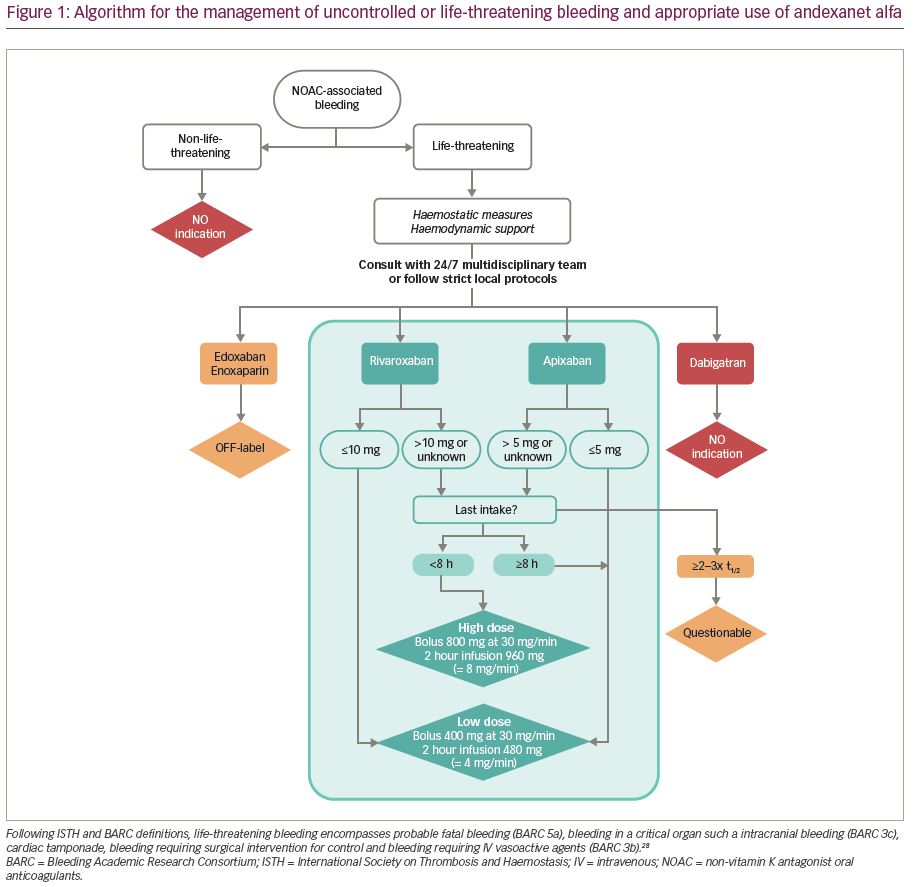 In healthy volunteers, 50–75 years of age, and treated with apixaban or rivaroxaban, bolus administration of andexanet alfa reduced anti-FXa activity and restored thrombin generation within 2–5 minutes.16 When andexanet alfa was administered as bolus plus infusion, consistent with its half-life of ~1 hour, the effects were sustained and then waned after 2 hours. In a subgroup of participants, transient increases in levels of D-dimer and prothrombin fragments 1 and 2 resolved within 24–72 hours without thrombotic events.16

ANNEXA-4 was a single-group cohort study that evaluated the clinical utility of andexanet alfa in patients who experienced acute major bleeding within 18 hours after administration of apixaban (54%), rivaroxaban (40%) or enoxaparin (6%).17 Sixty-four percent of patients suffered from intracranial bleeding and 26% from gastrointestinal bleeding. Patients were treated with a bolus of andexanet alfa, followed by a 2-hour infusion. Treatment with andexanet alfa resulted in a 92% reduction of anti-FXa activity. In 85% of patients with gastrointestinal bleeding and in 80% of patients with intracranial bleeding, ‘excellent’ or ‘good’ haemostatic efficacy was observed at 12 hours, as adjudicated according to prespecified criteria. Within 30 days, 14% of the patients had died. Thrombotic events occurred in 10% of patients, none of whom had yet restarted oral anticoagulation.17

Based on the results of the ANNEXA-4 study, the use of andexanet alfa has been conditionally approved by both the US Food and Drug Administration and the European Medicines Agency for adult patients treated with a direct FXa inhibitor (apixaban or rivaroxaban) when reversal of anticoagulation is needed due to life-threatening or uncontrolled bleeding.15,18 However, the risk–benefit ratio of andexanet alfa in comparison to usual care remains to be determined. As this is a condition for accelerated approval in the United States, a randomised clinical trial is currently ongoing to determine the efficacy and safety of andexanet alfa compared to usual care in patients presenting with acute intracranial haemorrhage within 12 hours of symptom onset and within 15 hours of taking an oral FXa inhibitor, with an estimated completion date in 2023.19

With approval of idarucizumab in 2015,23 and andexanet alfa in 2019, effective direct anticoagulant reversal agents are now available for patients taking dabigatran, or apixaban or rivaroxaban. With the widespread availability of these effective anticoagulant reversal agents, the correct use of these agents in real-world care needs special attention. The decision to use reversal agents for NOACs is most likely to be made in the acute critical care setting, in which prompt decisions are required. Inappropriate use unnecessarily exposes patients to (thrombotic) risks, and increases healthcare costs.

The clinical settings in which idarucizumab is used in real-life care, in all probability, are a good reflection of the clinical situations in which andexanet alfa will be used as well. The appropriate usage of idarucizumab in daily clinical practice was evaluated in a retrospective observational study by Van der Wall et al.24 Between 2016 and 2018, 88 patients were treated with idarucizumab in 12 Dutch hospitals. The number of administrations of idarucizumab varied from 1–14 during the 2-year study period. Inappropriate use of idarucizumab occurred in 25 of the patients (28%): in 14 patients for an intervention that could have been delayed for at least 8 hours, and in 11 patients for bleeding complications that were not considered uncontrollable. Three patients (5.7%) had
non-detectable dabigatran plasma levels, in two of these patients the last drug intake was >72 hours previously and one patient used rivaroxaban.

These data demonstrate the importance of introducing a local treatment protocol for the appropriate use of direct anticoagulant reversal agents, and correctly determining the severity of the bleeding event or the urgency and bleeding risk of surgical procedures, and the importance of assessing the type, dosage and time of the last intake of the NOAC.

Routine coagulation tests (prothrombin time, activated partial thromboplastin time and international normalised ratio) do not provide an accurate assessment of the anticoagulant effects of FXa inhibitors. However, in case of serious bleeding, coagulation tests may help the clinician to support haemostasis. Anticoagulant effects can be measured via specific coagulation assays developed for the quantification of NOAC plasma levels. Most routine coagulometers are capable of measuring NOAC plasma levels within ≤30 minutes.25 Healthcare institutions are recommended to consider 24/7 availability of these tests for emergency situations. Absence of anti-Xa activity with chromogenic assays excludes clinically relevant drug levels. Protamine sulphate and vitamin K are not expected to affect the anticoagulant activity of rivaroxaban or apixaban. There is limited experience with tranexamic acid or prothrombin complex concentrates (PCCs).

In a meta-analysis of 10 single-arm studies in 340 patients, and a retrospective observational study of 31 patients who received PCC for FXa inhibitor-related major bleeding, effective haemostasis was reported in 69% and 81%, respectively.26,27 Based on non-placebo-controlled reports, however, it is difficult to determine whether PCC, in addition to cessation of direct oral FXa inhibitor, is more effective than cessation of direct oral FXa inhibitor alone. To the best of our knowledge, there are no randomised trials comparing PCC to andexanet alfa. The decision to administer andexanet alfa should be made in consultation with a multidisciplinary team who should be available 24/7 and consist of a coagulation expert, a cardiologist specialising in anticoagulation, a vascular internal medicine physician and a clinical chemist.

Fauve A Noordergraaf has no relevant conflicts of interest to declare. Marco Alings received consulting fees from Portola Pharmaceuticals.

This article involves a review of literature and does not report on new clinical data, or any studies with human or animal subjects performed by either of the authors. 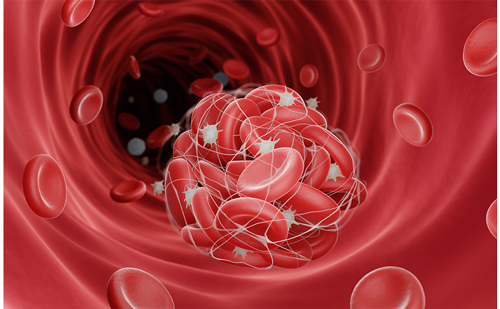 In this article, we review prior and recent landmark studies that have directed the treatment of cancer-associated thrombosis (CAT), discuss specific factors that influence anticoagulant choice, and explore ongoing trials that may impact treatment in the future. Older data estimated less than 1% of patients with malignancy developed venous thromboembolism (VTE), but more recent data […] 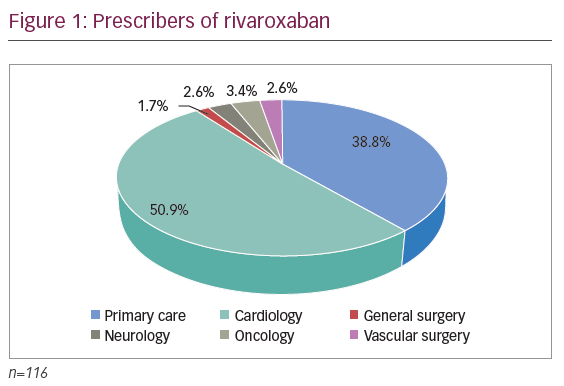 Improved Dosing and Administration of Rivaroxaban when Prescribed by a Cardiologist

Rivaroxaban is a direct factor Xa inhibitor indicated to reduce the risk of stroke and systemic embolism in patients with non-valvular atrial fibrillation (AF), treatment of deep vein thrombosis (DVT) and pulmonary embolism (PE). Furthermore, it is prescribed for risk reduction and prophylaxis for DVT and PE following hip or knee replacement surgery and […]