A 24-year-old female underwent an electrophysiological study because of recurrent episodes of drug-refractory, paroxysmal supraventricular tachycardia. During adrenergic stress, a narrow QRS tachycardia with eccentric atrial activation was reproducibly inducible. The response to premature ventricular extrastimulation during tachycardia suggested the presence of a slowly conducting accessory pathway. However, a comprehensive appraisal of the electrophysiological study delineated the tachycardia substrate as an atypical atrioventricular nodal reentrant tachycardia in the presence of a bystander nodofascicular pathway. Careful analysing of the basal pacing manoeuvers during sinus rhythm (para-Hisian and differential ventricular pacing) was crucial to establish the correct diagnosis and to avoid unnecessary left-side access to ablate this tachycardia.

This case concerns a 24-year-old female with recurrent episodes of paroxysmal palpitations. Her physical exam, 12-lead electrocardiogram (ECG), 24-hour Holter monitoring and echocardiogram did not reveal any abnormality. In the last 2 years, she had several admissions to the emergency department where paroxysmal, adenosine responsive, supraventricular tachycardia was documented. Anti-arrhythmic drug therapy (beta-blocker, flecainide) was ineffective, and the patient was referred to our centre for electrophysiological evaluation.

During atrial pacing, there was no evidence of ventricular preexcitation or antegrade dual atrioventricular (AV) node physiology. No tachycardia was inducible at the baseline state.

After isoproterenol infusion (2 mcg/minute), and with aggressive atrial burst pacing (240 ms), a narrow QRS tachycardia was reproducibly inducible. Tachycardia cycle length had an average of 320 ms; AH and HA intervals were 75 and 245 ms, respectively. Notably, tachycardia induction was independent of critical prolongation in the AH interval.

Figure 2 demonstrates ECG and intracardiac recordings during tachycardia and the effect of a premature ventricular extrastimulus (PVE) (S2). Based on these data, what is the most likely mechanism of this tachycardia?

This manoeuver was performed during isoproterenol infusion and stable VA retrograde conduction, and with the tachycardia was easily inducible. The differential ventricular pacing, at the same pacing cycle length (400 ms), showed longer Stim-A and local VA intervals during LV pacing (280 ms and 220 ms) compared with that during RV pacing (220 and 102 ms), respectively. This makes the presence of a left-sided AP unlikely.

The RAAS during tachycardia was identical to that obtained during RV and LV pacing making the diagnosis of AT unlikely, but still possible. The response to PVE (see Figure 2), reproducibly delayed the next atrial activation without altering antegrade HB activation. This phenomenon confirms the presence of an AP bypassing the HB and excludes the diagnosis of AT. This paradoxical delay in atrial activation in response to PVE could be observed during PJRT using a slowly conducting AV bypass. However, the response to para-Hisian pacing and differential LV-RV pacing showing identical RAAS to that during tachycardia favours the diagnosis of an occult NFP connected to the left extension of the nodal SP.

Accordingly, the presented tachycardia could be an O-AVRT using an NFP for the retrograde limb, or an atypical fast-slow AVNRT with a bystander occult NFP. During AVNRT, a His-refractory PVE should not have any effect on the ongoing tachycardia. However, the presence of an NFP connected to the nodal SP may explain the paradoxical delay with S2 (see Figure 2) maintaining the same RAAS.

In order to elucidate the role of this NFP in tachycardia mechanism, a right bundle branch block (RBBB) was intentionally induced by applying gentle pressure against the early proximal portion of the RBB. The induced proximal RBBB did not affect the ongoing tachycardia cycle length, and the His-atria (HA) intervals remained unchanged (245 ms) (see Figure 4). The latter phenomenon confirmed the bystander role of the NFP in this case. An O-AVRT using a right-sided NFP typically shows significant tachycardia slowing when RBBB develops.4 Importantly, the longer VA interval during LV pacing compared with that during RV pacing points against the presence of a left-sided NFP.

Finally, based on these electrophysiological features and phenomena, the best explanation of tachycardia mechanism is atypical AVNRT with a bystander occult NFP. This NFP inserted into the left nodal SP provides the route for PVE during His refractoriness to penetrate and prolong the refractoriness and conduction over the nodal SP during tachycardia.

Ventricular entrainment was not performed in this case that might have added further evidence of tachycardia mechanism through analysing RAAS, AV response after pacing termination and the post-pacing interval.

Ventricular entrainment was not performed in this case that might have added further evidence of tachycardia mechanism through analysing RAAS, AV response after pacing termination and the post-pacing interval. 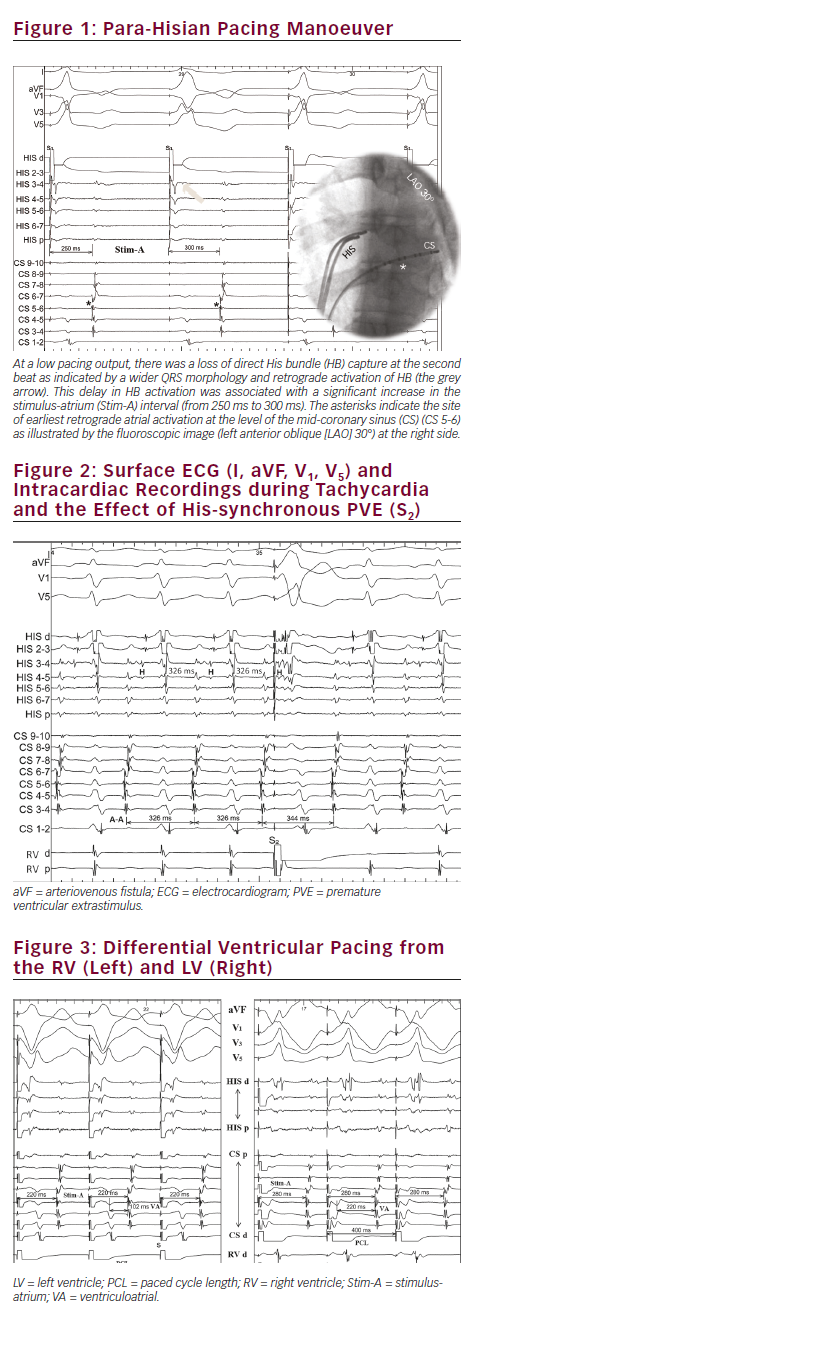 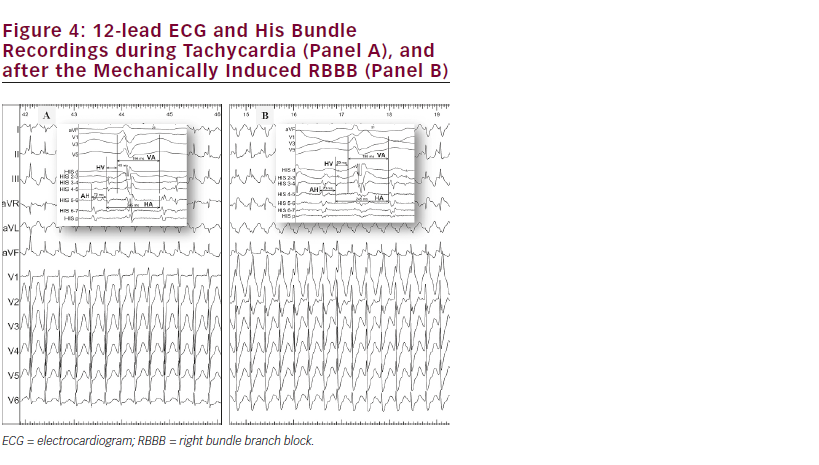 However, standard, right-sided, RF ablation of the nodal SP at the area between the CS ostium and the tricuspid valve rendered the tachycardia non-inducible. The patient remained asymptomatic, off anti-arrhythmic drugs, during an 18-month follow-up period.

Even if there is no conclusive evidence, the successful RF at an area relatively distant from the earliest activation site during tachycardia is in favour of atypical AVNRT rather than PJRT using a slowly conducting AV bypass tract.

This case highlights the crucial role of basal electrophysiological study to fully understand the tachycardia mechanism. In this case, analysing only tachycardia features with eccentric RAAS and the response to PVE, would have led to the diagnosis of O-AVRT and an unnecessary left side access to map and ablate the earliest atrial site. Careful analysis of basal pacing manoeuvers (para-Hisian and differential RV/LV pacing) was critical to delineate the tachycardia substrate. Furthermore, mechanical RBBB might be induced intentionally for diagnostic utility in exceptional cases. Such cases may be rare and conclusions cannot be generalised, even so familiarity with different pacing manoeuvers may help to understand arrhythmia mechanisms and to face challenging cases.

Compliance with Ethics Guidelines: Informed consent for the procedure was obtained from the patient.

This article is published under the Creative Commons Attribution Noncommercial License, which permits any non-commercial use, distribution,
adaptation and reproduction provided the original author(s) and source are given appropriate credit.