Introduction: Brugada syndrome (BrS) is an important cause of sudden cardiac death but diagnosis can be challenging. Body surface ECG changes in BrS are dynamic, and elicitation by sodium channel blockade carries a risk of death. The epicardial substrate of the overt Type 1 BrS ECG is known but not always spontaneously present in cardiac arrest survivors with confirmed drug-induced BrS. Traditional markers of risk in Brugada syndrome (spontaneous Type 1 ECG and syncope) are often absent in cardiac arrest survivors.

Methods: A total of 21 BrS cardiac arrest survivors (BrS VF), 20 BrS patients without a history of potentially lethal arrhythmia and 11 asymptomatic relatives of BrS patients proven not to have the condition by negative Ajmaline test were recruited. The 252 lead body surface ECG was combined with a 3D torso and cardiac model to reconstruct epicardial electrograms (ECG imaging; CardioInsight, Medtronic, USA) following maximal Bruce protocol exertion and into full recovery (~10 min). Local activation (LAT) and repolarization times (LRT) were measured by fully automated software and used to calculate measures of delay, dispersion and gradients for AT and RT.

Conclusion: Measures of epicardial electrophysiology by ECG imaging at rest and immediately following peak exercise could form a role in both diagnosis – possibly reducing the need for sodium channel blocker challenge – and risk stratification in the Brugada syndrome. Further study would be required to determine the clinical effectiveness of such a tool in a consecutive population. ❑ 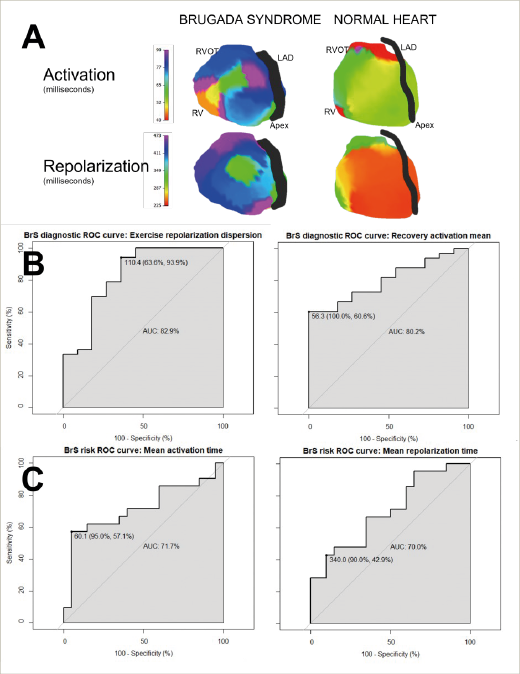