Introduction: The subcutaneous implantable cardioverter-defibrillator (S-ICD) has comparable efficacy and avoids many of the complications associated with transvenous ICDs. There is a Class I recommendation for S-ICD implantation in patients at a high risk for infection or are without appropriate venous access and no indication for pacing. Many heart failure (HF) patients fall into these categories. The eligibility for S-ICD is identified during a mandatory pre-implant screening. Surface ECG recordings of 10 seconds duration taken in multiple body postures are used as a surrogate marker of future S-ICD vectors to be able to assess vector morphology and determine S-ICD eligibility. Temporal variations in R and T waves amplitudes are frequently observed on ECG recordings, particularly in HF patients undergoing diuresis where changes in electrolytes, body weight and fluid shifts can cause detectable dynamic changes on the ECG. Subsequently, the T:R ratio – a major predictor of S-ICD eligibility – is dynamic.

Methods: We ran a prospective study on a total of 21 participants at our centre. 7 volunteers with structurally normal hearts and 14 patients with a known history of HF admitted for diuresis on clinical grounds. Participants were asked to wear Holter® monitors for 24 hours. The leads for the Holters® were positioned to mimic and correspond to the three vectors (primary, alternate and secondary) of an S-ICD. We monitored the T:R ratio throughout being the main determinant of S-ICD eligibility. We chose a T:R ratio eligibility cut-off of 1:3 based on the manual S-ICD screening tool following the manufacturer guidelines. We used a convolutional neural network-based model utilising phase space reconstruction matrix as a state-of-the-art tool to efficiently and accurately determine and record the T:R ratio for the leads over the 24-hour period.

Conclusions: T:R ratio, one of the main determinants for S-ICD eligibility is significantly higher, and with more tendency to fluctuate overtime in patients with HF. We report an accurate, and reproducible method that utilises prolonged screening to find the cohort of HF patients deemed eligible for S-ICD with low probability of T Wave oversensing (TWOs) and inappropriate shocks. 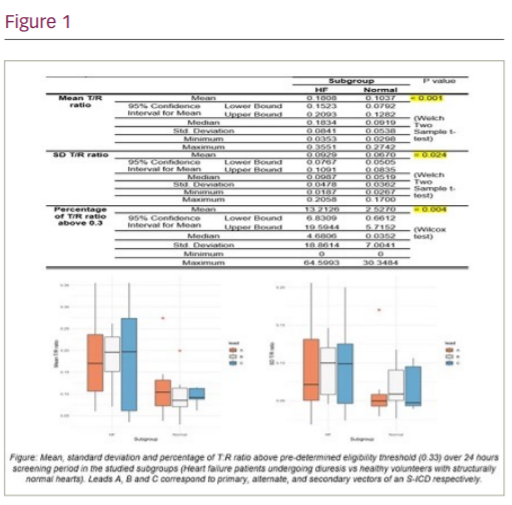