Background: Pulmonary vein isolation (PVI) is the gold standard management for patients with atrial fibrillation (AF) refractory to medical therapy. Contact-force (CF) sensing very-high-power short-duration (vHPSD) radiofrequency (RF) ablation (90 W/4 seconds) has emerged as a novel ablation modality. Previous RF ablation utilized Ablation Index (AI) as a surrogate marker of lesion quality to guide the operator, which is not utilized in QMODE+ (vHPSD) and thus, there is limited guidance on effective lesion formation. In this study, we investigated the correlation between certain lesion parameters to identify relationships and potential determinants for effective lesion formation. Furthermore, we studied the relationship between different anatomical locations on these parameters to gain further insight.

Results: PVI was successful in all patients while first-pass isolation was observed in 30 patients (50%). A total of 6,040 lesions were performed, with 2,968 and 3,072 lesions in the left and right WACA, respectively. The average CF exhibited a positive correlation with maximum temperature attained and impedance drop (p<0.0001) while displaying a negative correlation with FTI (p<0.0001) (Figure 1). The PV carina (region 9) of the right WACA had the smallest impedance drop (p<0.0001) while the PV carina of the left WACA exhibited the lowest average CF and temperature attained (p<0.0001) (Figure 2). The highest number of gaps or acute reconnection (17 out of 30 patients) were seen in the region of the left pulmonary vein carina (p<0.0001).

Conclusion: To our knowledge, this is the first study that has investigated the characteristics of vHPSD ablation lesions according to different anatomical regions in the left atrium. CF was positively correlated with maximum temperature and impedance drop but negatively correlated with FTI. This is very unique to temperature-controlled ablation to reduce complications. Furthermore, ablation at both right and left PV carina demonstrated lower impedance drop and average CF which may explain difficult catheter positioning as well as thicker tissue. This study elucidates the relationship between the anatomical region, contact force, temperature and impedance drop, and will facilitate optimization for effective vHPSD lesion formation. ❑ 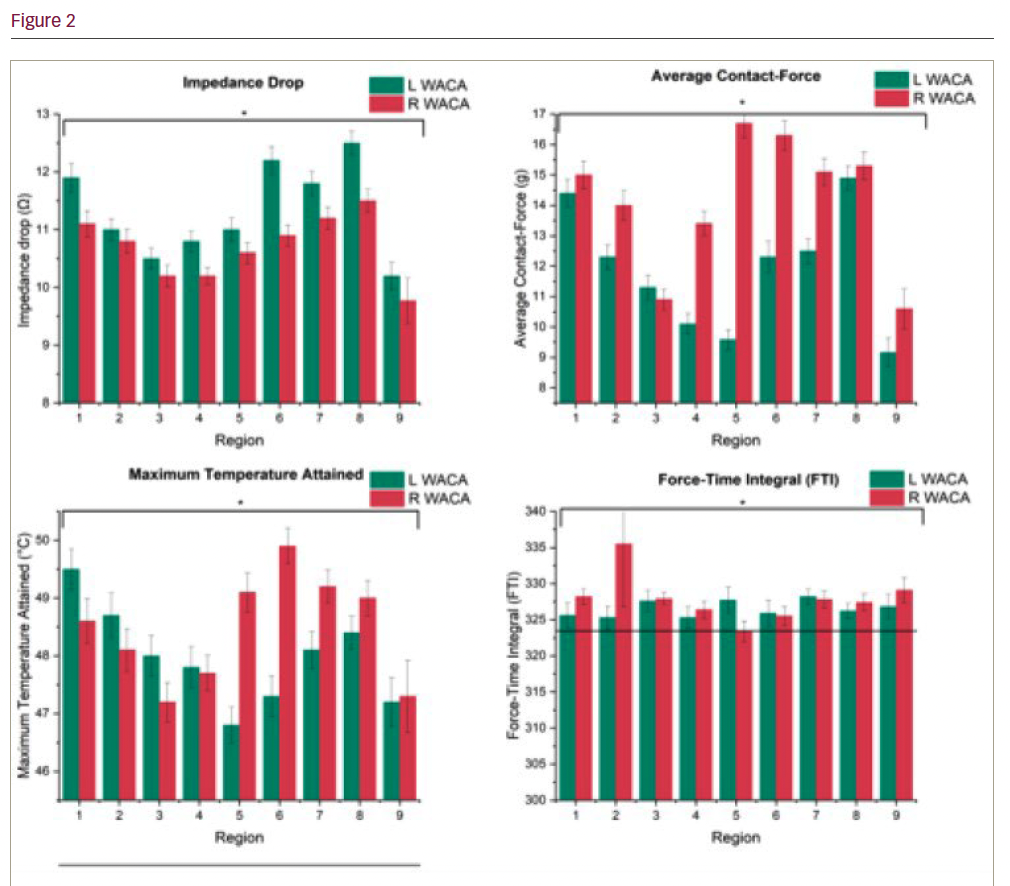