Introduction: Ventricular tachycardia (VT) storm is a medical emergency characterised by clustered episodes of ventricular arrhythmia seen in patients with structurally abnormal hearts. Effective management of this complex, life-threatening phenomenon requires an understanding of arrhythmia mechanisms and the multi-modality treatment options. Although ablation can be life-saving, it is associated with significant risk in this sick cohort and considered patient selection is essential. Direct admission of patients with recurrent ICD shocks or incessant VT to a tertiary electrophysiology centre from the community can provide early expert-led decision-making.

Methods: VT storm was defined as three or more separate episodes of sustained VT within 24 hours, each requiring termination by an intervention. Incessant VT was defined as sustained VT for more than one hour, refractory to, or recurring promptly after, termination by intervention. These patients were eligible for direct admission to St Bartholomew’s Hospital from the community under the Electrophysiology on-call service. Admissions via this pathway between August 2018 and February 2019 were screened. Additional cases were identified from a manual search of the hospital’s catheter ablation database between June 2016 to August 2018. Cox regression analysis was performed to identify associations between pre-specified variables. 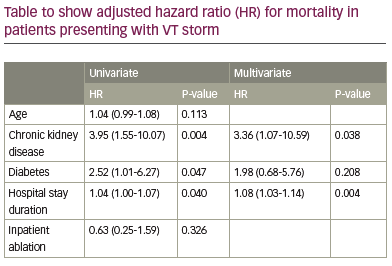 Conclusion: Occurrence of VT storm is a poor prognostic marker and concurrent CKD may confer greater risk. Further extrapolation of findings and associations is limited as patient’s management was non-random and based on informed decision-making. Although the outcomes between non-invasive and invasively managed cohorts was similar, these may represent very different patient groups, with patients at both ends of the disease severity spectrum potentially managed more conservatively. Outcomes are similar to other published International experiences and it demonstrates feasibility of early specialist engagement, in keeping with consensus recommendations. Further study and sub-group analysis could guide strategy choice and would be valuable to support decision-making.