Introduction: Implantable cardioverter-defibrillators (ICDs) are conventionally programmed to deliver maximum energy shocks for the treatment of ventricular arrhythmias. DeFT Response™ is an algorithm available in Abbott ICDs that reduces the typical shock duration from 10.0 ms to 7.5-8.0 ms. This technology has been shown to reduce the risk of pro-arrhythmia, and has been successfully used in patients with high defibrillation thresholds. As implant centres move away from routinely performing a defibrillation threshold test at implant, DeFT Response™ programming is a safe alternative to conventional programming. Once DeFT Response™ is enabled, it is important for the ICD clinic to continue to re-optimise DeFT Response™ settings. Optimisation is based on the high voltage impedance (HVI) of the ICD system. A review was conducted to establish how many patients with Abbott ICDs had DeFT Response™ enabled, and how frequently these patients were re-optimised in our clinic. In addition, we investigated whether HVI measurements in clinic represented those seen on a day-to-day basis.

Method: Patients with Abbott ICDs implanted between January 2014 and October 2019 were identified. Patients with <2 years follow-up since implant were excluded to allow a suitable duration to track changes in HVI measurements. The HVI measurements from all scheduled in-clinic and remote follow ups were reviewed for each patient. The range of HVI measurements from scheduled checks (i.e. highest HVI – lowest HVI) was compared against the lifetime daily HVI range reported by the device in the “HV Lead Impedance and Battery” diagnostic, an example of which is shown in Figure 1.

Results: A total of 76 patients were identified with ≥2 years of follow-up data, 14 of whom had DeFT Response™ enabled. The lifetime range of HVI measurements seen on daily checks was higher than those seen on scheduled downloads (40.5 ohms vs 21.7 ohms respectively). This highlights the difficulty with maintaining day-to-day optimisation of DeFT Response™ parameters, as these are based on in-clinic measurements alone. Re-optimisation occurred in only 2 patients with DeFT Response™ enabled, even though it was indicated during the follow up of all 14 patients.

Conclusions: DeFT Response™ offers a theoretical benefit for patients with high defibrillation thresholds. Optimal programming is based on the HVI, but subsequent variations in this measurement can temporarily lead to programmed parameters being “sub-optimal”. Re-optimisation of DeFT Response™ programming during clinic visits is important, but has been underutilised in our ICD clinic. The development of an auto-adapting DeFT Response™ algorithm would greatly aid in maintaining optimal programming at all times. 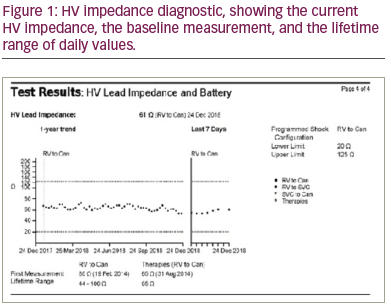